I feel like I'll lose it. It's why I keep documenting, though not everything ends up here. Today was a busy day in the household, but I am quiet with the three week old on the still small centre of things. She's a little satellite in orbit around me. Left to ourselves in the house this evening, she curled up and fell asleep in my lap like a cat. She looks different day to day and demonstrates more awareness day to day as well, craving contact, settling when talked to, experimenting with moving her head about, more control over her arms and hands. Having a second means you know what to cherish and what to look forward to, as you see thisbomh target of development that is your toddler. I am still wholly charmed by my toddler, who picked dandelions today, and clutched them in a bunch on one hand while being carried back inside. Adults put things down and pick them up again. Toddlers hold into things or give them to a someone to hold for safekeeping, or dramatically throw them aside.
at 8:07 PM No comments:
Email ThisBlogThis!Share to TwitterShare to FacebookShare to Pinterest

23mo's eyes light up when he spots an object of desire: a melon ice bar I'm eating that he's confident I'll share with him (I do, we practice taking turns), his baby sis when he comes in to say goodnight to her, anything in a box, a puppy seen from indoors, the back door opening and his first steps outside to play.

2 week old's eyes are surveying the scene while she's awake, head turtling from side to side. Even at this age, I sense she is settling in: able to be more easily calmed by familiar voices, touch, and smells; starting to recognize what happens right before she's fed; when being changed is ending and she will be comfortable again; that bath time isn't so scary; that she is being cared for.
at 9:23 PM No comments:
Email ThisBlogThis!Share to TwitterShare to FacebookShare to Pinterest

Figured out why Tyler once in a while lies on his stomach and puts his arms behind his back, palms up...he's taking on the posture of Ashley, who likes to be swaddled. It's also why when he sees her lying down on one side he snuggles up alongside, facing her, feigning sleep. He makes cursory attempts to soothe her when she cries, with a conciliatory pat, but backs off when her crying escalates...'you take her,' he seems to say.

Meanwhile, baby girl's face is filling out, her hair is getting longer, and her fingernails will need to be cut soon again. She likes to be swaddled and to co-sleep...I think she'll be cuddly for a long time.
at 5:10 PM No comments:
Email ThisBlogThis!Share to TwitterShare to FacebookShare to Pinterest 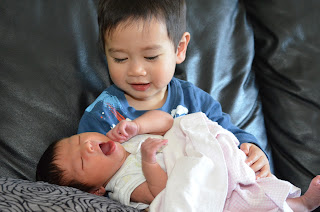 at 9:44 AM No comments:
Email ThisBlogThis!Share to TwitterShare to FacebookShare to Pinterest

30 March, thinking, "This is a blessing, to kiss my sleeping toddler befor heading to the hospital to have his sibling."

Tyler relates to Ashley as adults do, tentatively examining her feet, instinctively placing one hand higher to support her neck when holding her on the couch, and even selectively ignoring her (while watching Treehouse with her sleeping next to him, remembering only to check on her / kiss her between shows!). It helps him not to be jealous when he sees he gets attention while she just lies there and sleeps on and on.

I am unquestionably Ashley's mama, since we plan to exclusively breastfeed the first six months, but at times for Tyler I am like a favorite aunt. I forget he shouldn't play with the window shades and play peekaboo with him 'hiding' behind them, until of course he pulls one down. I let him have tastes of the yummier snacks I'm having...I have less one on one time with him so when I do, I pay full attention to him.

Tyler is adjusting well by being flexible in who he can be with. When we have friends over, he brings book after book to our friend who willingly reads aloud to him. He plays in the backyard with my brother or my husband's brother keeping a watchful eye. He'll ask his grandfather for snacks. He'll dance with anyone...

One week old and it's being noted that Ashley is much more aware and looking around more, though she still has that newborn alien look to her ;) She's light enough to seemingly not weigh anything, but after putting her down or handing her off, you realize she might just be growing and getting bigger.

Having two also automatically means that you seek photos when they are together, but meanwhile they both change every day in different ways. I can see I might lose track of one or the other and then suddenly be surprised by their unstoppable progress...
at 8:26 PM No comments:
Email ThisBlogThis!Share to TwitterShare to FacebookShare to Pinterest

We had converted Tyler's crib to a bed, but he treats it as a day bed/couch, so we got him a thick Sealy twin and are starting the process of having him nap and sleep there. (He had taken to sleeping on a queen bed in the guest room!)

Out of necessity he's being encouraged to make way and be more independent. He hasn't been too jealous of my attentions to his baby sis. I've realized that with my mother-in-law looking after him for the past ten months when I returned to work, it's her focus that he looks for, and for the regulating and maintaining of his schedule. The rest of us are a diversion. He seems to accept that I/baby are often one unit, as I feed or carry or hold her.

I do cherish the one-on-one time we still have together. I notice his cognitive leaps. We have a motion-activated hall light, and when it turned off, he went and stood under it, looking up. He started reaching up and jumping, and I thought, 'doesn't he realize he is too far away to touch it?' but then the light turned on. He figured out that those walking by can turn it on, and his height as is couldn't do it. I've also seem him point at the library light fixture to turn the light on in the room, and he had started manipulating the dimmer switches in the basement a few months ago. Still, it's a more complex cause/effect with a motion light, and recognizing and overcoming your own limitations to turn it on was impressive to me.

I catch myself looking at my newborn, not even a week old, and asking her to be more clear in what she wants ;)

She learns and adapts also. She feeds at times like her brother did, tiny fists clenched under her chin, intent. When I poke a pinky to a fist, she pauses, and then unfurls her own pinky and another finger to grasp on. Tyler in his first moments clutched my finger in his hand with surprising strength, and her grip may exceed his. Tyler still will take an offered hand - we will all be in the hand-holding stage for a while.
at 8:24 PM No comments:
Email ThisBlogThis!Share to TwitterShare to FacebookShare to Pinterest

Big bro today saw little sis fussing in the swing chair and asked if he could carry/pick her up. I said yes, and said we'd go to the couch. He runs over, scales the couch, and sits with his arms out like a forklift. I place her in his arms and his eyes widen, he considers the weight of her, and bends his head down in a 'kiss.' He touches her foot in the sleeper. All is well until she fusses a bit and he pushes her off and backs away...
at 5:31 PM No comments:
Email ThisBlogThis!Share to TwitterShare to FacebookShare to Pinterest

Remembering what breast feeding (motherhood) is like: a hungry mouth clamps down on a sensitive part of your body. Instead of pulling away, you move closer.

Signs of awareness: somehow knowing the difference between being held and being put down, preferring of course, to be held.

Settling/attending to the sound of mom or dad's voice.

When feeding, stops and opens her eyes when someone enters the room, resumes when they leave.
at 2:57 PM No comments:
Email ThisBlogThis!Share to TwitterShare to FacebookShare to Pinterest

We were mindful of how to introduce her to her big brother Tyler. When we came home, everyone cleared out except Tyler and his grandmother, and we came in with her. He studied the situation and then when we put the bassinet on the ground with her in it, he crouched down to check her out. We had been having his godmother and their 6 month old over at the house frequently so he called her by that name. He gave his version of a kiss (forehead bump) a few times. He was startled when she cried and backed away, but came back when he settled. In all, she was a novelty, and he seemed pleased.

He quickly leaned to call her 'little sister' in Cantonese. There were enough family members in the house that he has lots of attention, and I spent some one on one time playing with him as we always do. He fussed a little to be caried when his grandmother carried her instead of him.

But then, he was able to climb into the chair with me while I was holding her, and suddenly having a child on each arm felt both surreal and natural. Perhaps it's been the short time apart, or I'm newly aware, but his language seems to have made a leap. I'm not sure how much he understands, but I changes him, and then changed his sister, and after, he looked at the change table supplies and pulled a few of her smaller diapers out to look at. We bathed her and them him, and he watched while she fussed, added a couple of his toys to her bath, and waited/loitered at the bathtub waiting for his turn.

In the good night ritual he kissed me and then Ashley as well.

These are investments we are making in both their lives, to not take a close relationship between them for granted, but to shape it to one where they will always look out for each other, and be the best allies/companions that can exist, from the playground, to shared joy and troubles.
at 8:47 PM No comments:
Email ThisBlogThis!Share to TwitterShare to FacebookShare to Pinterest
Newer Posts Older Posts Home
Subscribe to: Posts (Atom)